The Non-Equity Jeff Awards came and went and as expected it was a night to remember. The cast performed “The Black One” in the New Work category. Between Passing Strange and Violet, Bailiwick Chicago was nominated in over 10 categories. In addition to newly appointed Artistic Director Lili-Anne Brown, I’m expecting big things from the company in the future.

When I looked out at the audience from on stage, at all the people I have worked with over the past 4 years, I had that “so THIS  is what I’m doing with my life“.  At least I’m not the only one. Congrats to everyone for surviving another year in the life of the theatre.
W

I can’t believe it but tonight I will be performing at the Non Equity Jeff Awards in Chicago. The ceremony is taking place at the incredible Park West.  Last time I was at there I saw Raphael Saadiq who killed it. It’s a great Chicago venue with a large stage so I can’t wait.

The Jeff Awards are Chicago’s version of the Tony’s saluting the best musical and theatrical performances of the year. There are many great nominees, some familiar faces, and I salute everyone up for an award.  Last year I was also one of the hosts for the Equity Jeff Awards.

Tonight I will be performing with the cast of Passing Strange as the show is nominated for Best Musical.  Passing Strange is simply the gift that keeps on giving. Even though we ran almost a year ago the show keeps popping up again and again.  This trip was more difficult to swing (can we say GOD SAVE ME from all these Red Eye Flights?) but I know I am very fortunate for the opportunity. Performing at the Jeff’s is something I’ve always wanted to do and I can’t believe I am now getting the honor.

Look out for more info on the event 🙂

Special thanks to the amazing Hedy Weiss and the Chicago Sun Times for mentioning Passing Strange on their theater review for 2011!

Want more press? Check it out! 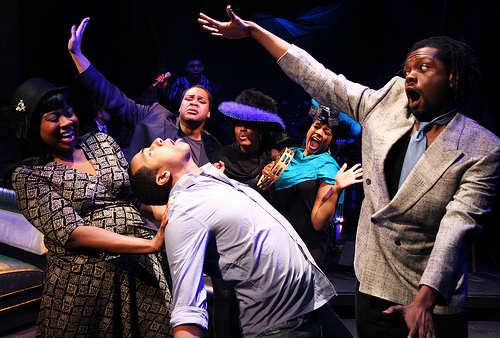 It was an unforgettable experience all around, 100% supported by Bailiwick Chicago, fabulous direction, great audiences, and an all-star ensemble. We can only hope there are more productions like Passing Strange down the road. Passing Strange was also nominated for several awards by the Black Theatre Alliance. Directed by Lili-Anne Brown, musical direction Jimmy Morehead, book and music by Stew and Heidi. Passing Strange originally premiered on Broadway in 2008.

Sometimes you have to give a shout out to memorable experiences so here is some Passing Strange Love!  The show premiered in Chicago this past spring and was nominated for a Joseph Jefferson Award (Best Ensemble) and won several awards from the Black Theatre Alliance.

It was one of the singularly most exhilarating theatrical experiences Whitney has had to date as the piece pushes boundaries and features a stunning score. The musical first premiered on Broadway in 2008 and won the Tony for Best Book.

Whitney had the privilege of playing Desi, a revolutionary living in an artist commune.  Special thanks to Bailiwick Chicago, Lili-Anne Brown and everyone who came out to the show during its run.

As Desi says “Only Love is Real”.

Watch the trailer below!